Don’t you just love a place where the local people make it that much better? That is what I found in the Solomon Islands.

Now don’t get me wrong, you can travel anywhere in the Pacific and that infectious islander smile just warms your heart as much as the sunshine. There is something so different about the Solomon Islanders though.

I can’t describe the place better than saying it is raw an undiscovered. It does not get a mainstream tourism boom like say Fiji or Vanuatu, which adds a genuine air to their open friendliness. At first, the locals seem a little shy, but learn a bit of the local lingo (a Pigin English dialect) and a cheekiness soon shines through. Before long you will have a friend for life.

I recently spent time in the Solomon Islands and I enjoyed every moment and aspect of it. I knew of the Solomon Islands some time ago when I had a friend working there as a radiographer. He showed me images of pristine islands with not a soul in sight. Being a beach and ocean lover, I was sold from that moment. Ten years later, I found myself stepping off the plane in Honiara filled with anticipation and excitement.

The Solomon Islands are remote and still undiscovered by the average traveller. I think that is what has always attracted me to travel such destinations. To say I love to get off the beaten path is an understatement. This is something the Solomon Islands never failed to deliver. My first taste of that was while sat on the local banana boat that took me from Nusa Tupe Airstrip to Fatboys Resort, located on Babanga Island in Western Province. I had just literally bumpingly landed on a grass runway after flying in low over a patchwork of azures created by the reef below. The airport refuelling station at Nusa Tupe was literally a messy pile of barrels of aviation fuel laying around. It made me giggle – OHS would have a heart attack! 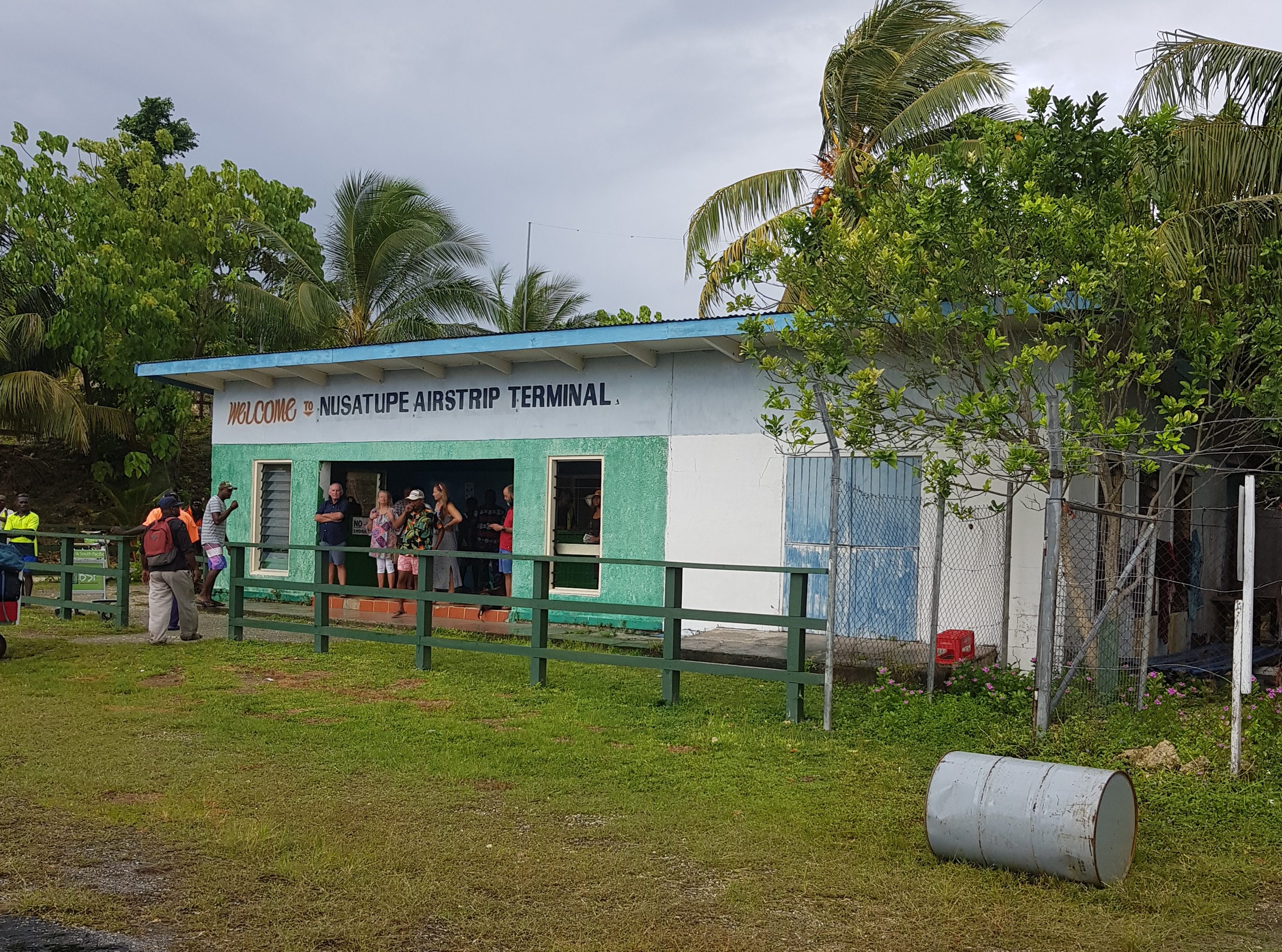 Back to the boat ride, our luggage was thrown on the front of the boat – there was no safety briefing, or life jackets. This was going to be fun. It was, I won’t lie. I clung to the side of the boat as we tore off across the water, passing islands that would be a dream to be shipwrecked on as they looked pure paradise. All safety concerns soon left me as I realised the driver was so familiar with the waters. We were in good hands.

Arriving at Fatboys, my breath was taken and I tried grabbing it between gulps of sweet salty air. If Swiss Family Robinson was set over the water and not in the tree tops, this would be the place for it. A restaurant and bar come social meeting place mixed with ocean zen area sits 100m out over the water and connected to the island by one funky jetty.

Now I often have times when travelling when I get to a place, that I feel home, like I can totally live here. A place where you leave part of your soul and know it ‘aint coming home with you’. I felt home at Fatboys. Everything about the place – the staff that worked there were up to challenge me in a game of pool in an instant, the other guests there that you would sit with and share the days adventures. It was so communal. I truly loved it. 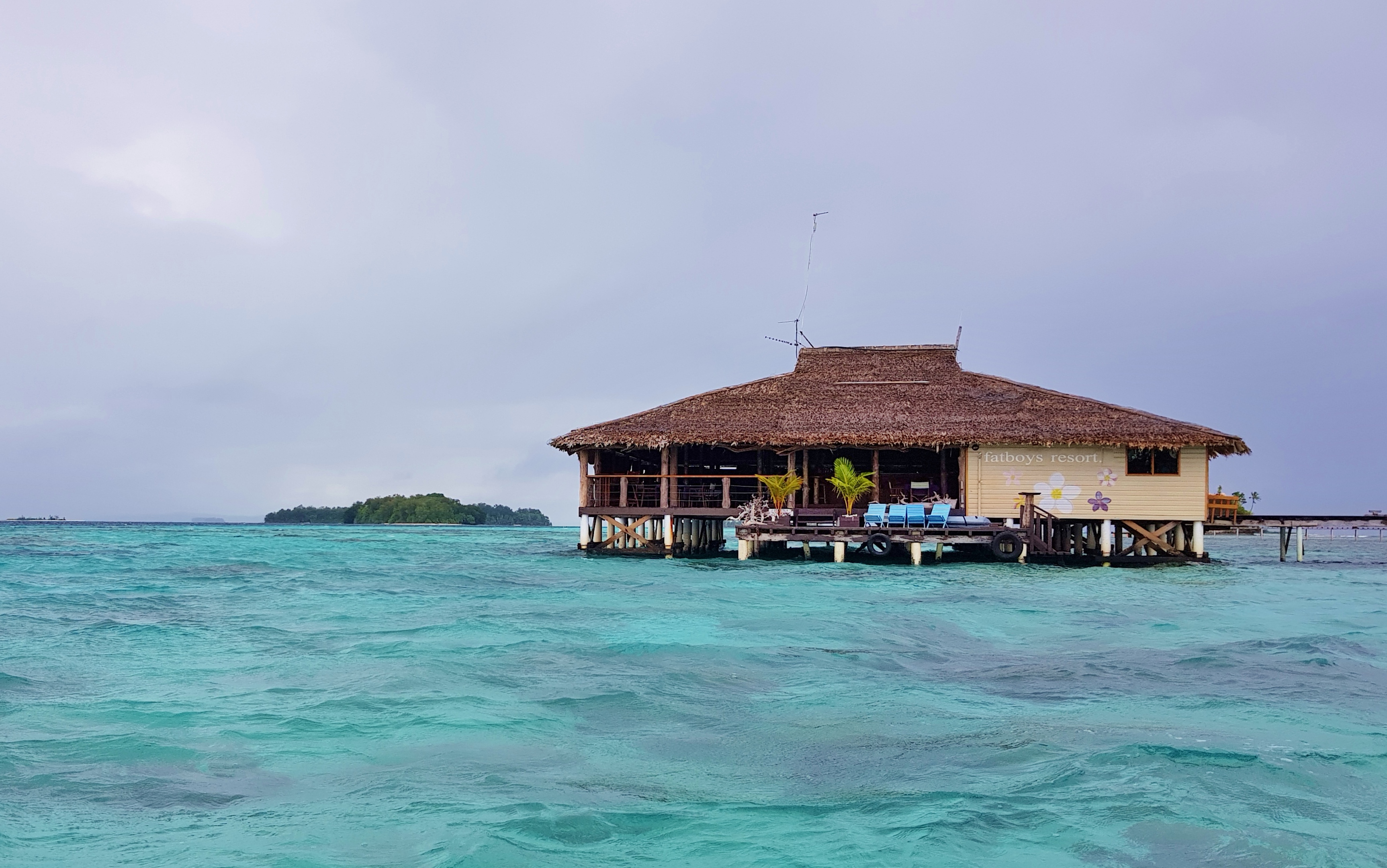 The next few days at Fatboys were spent seeking adventures. The first was to get under the surface and explore the underwater wonders. Now this was something I had been waiting for most of all. Being an avid diver, I was told of the magic of the Solomons, the war history from WWII and the wrecks that were left as a reminder of the war in the Pacific. It was back on the banana boat to scoot off to the first dive site.

Toa Maru is one of the South Pacific’s most popular dive sites of WWII shipwrecks. This reasonably intact Japanese transport ship of some 140m (450′) length is lying on its starboard site. It was run aground after suffering damage from an American attack. Dive throughs, amazing marine life and the earie feeling of a watery grave just captivated me. I was hooked. I did a few more dives of the area and I was not disappointed. Even when the weather turned on us, to the point I was sat in the banana boat clutching the chair I was sat on, wearing my snorkel and mask in the boat as waves pelted us from every angle, it was exhilarating and exciting.

Not one to sit around and relax, although that is so easy to do in the Solomon Islands, I was off on more adventures. After talking one of the staff at Fatboys into taking me out to a well-known dive site, it was back in bikini, because no wetsuits are required in the warm waters, and into the boat. We were off to Hellcat. That in itself sounded awesome to me – Hellcat, it must be epic. Now in just 9m of water, there was no need for diving, as I am told if you are a strong swimmer with good lungs, you can snorkel it. The driver slows the boat, and asked me to get my fins and mask on, as we must be right over it. I look around, and we are in open water, it’s deep and dark, so I am a little nervous. 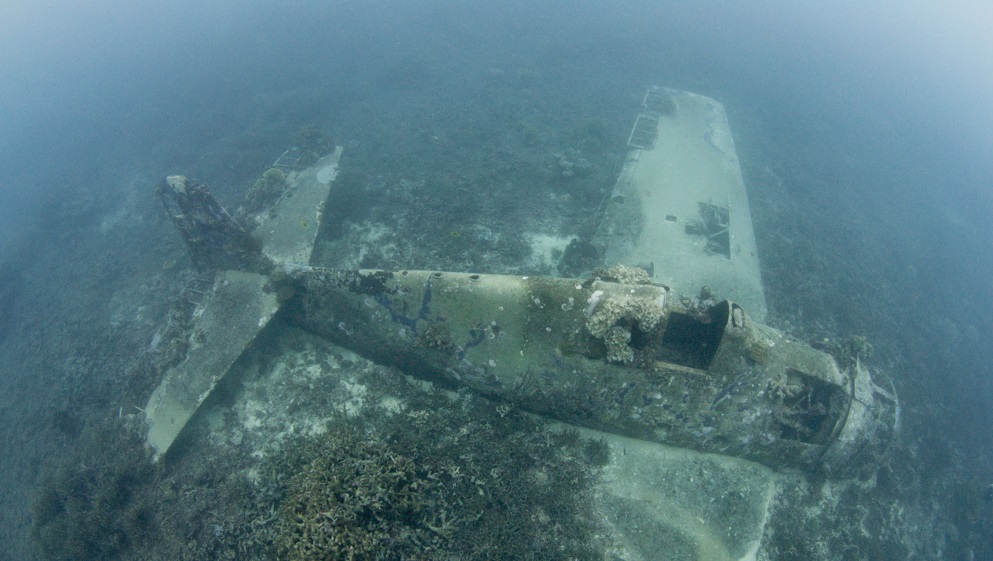 Without hesitation, I jumped overboard on the queue. How he knew where it was was beyond me but you know, sometimes you just have to trust the locals. There below me, was Hellcat – a US Fighter Jet, fully in tact on the ocean floor. It was amazing. I must admit I was constantly looking over my shoulder for unwelcomed guests as the area is known to be ‘sharky’, and with no reef to hide on, it was in the back of mind. It was worth every moment though.

From underwater exploration, I went ashore, to explore Kennedy Island. Walking around the island, I am transported back to when US President Kennedy was shipwrecked nearby and swam ashore to this very island. The war history in the Solomon Islands is captivating, and I can’t help but imagine what it must have been like hiding out on this island, with the fear of Japanese attacks at any moment.

Leaving Fatboys with a heavy heart, I moved on to Tavanipupu, via two small plane rides, grass runway landings and another banana boat ride. Known as a place where the ‘fish pass through’, Tavanipupu was completely different. It was here that the Royals stayed, Prince William and Princess Kate when they visited the Solomon Islands. Everything here was pristine, manicured lawns scattered with palm trees. Unbelievable sunsets washed the shores. The air was different here. It wasn’t as adventurous, but more a gentle relaxing breeze that caressed your face and forced you to unwind. 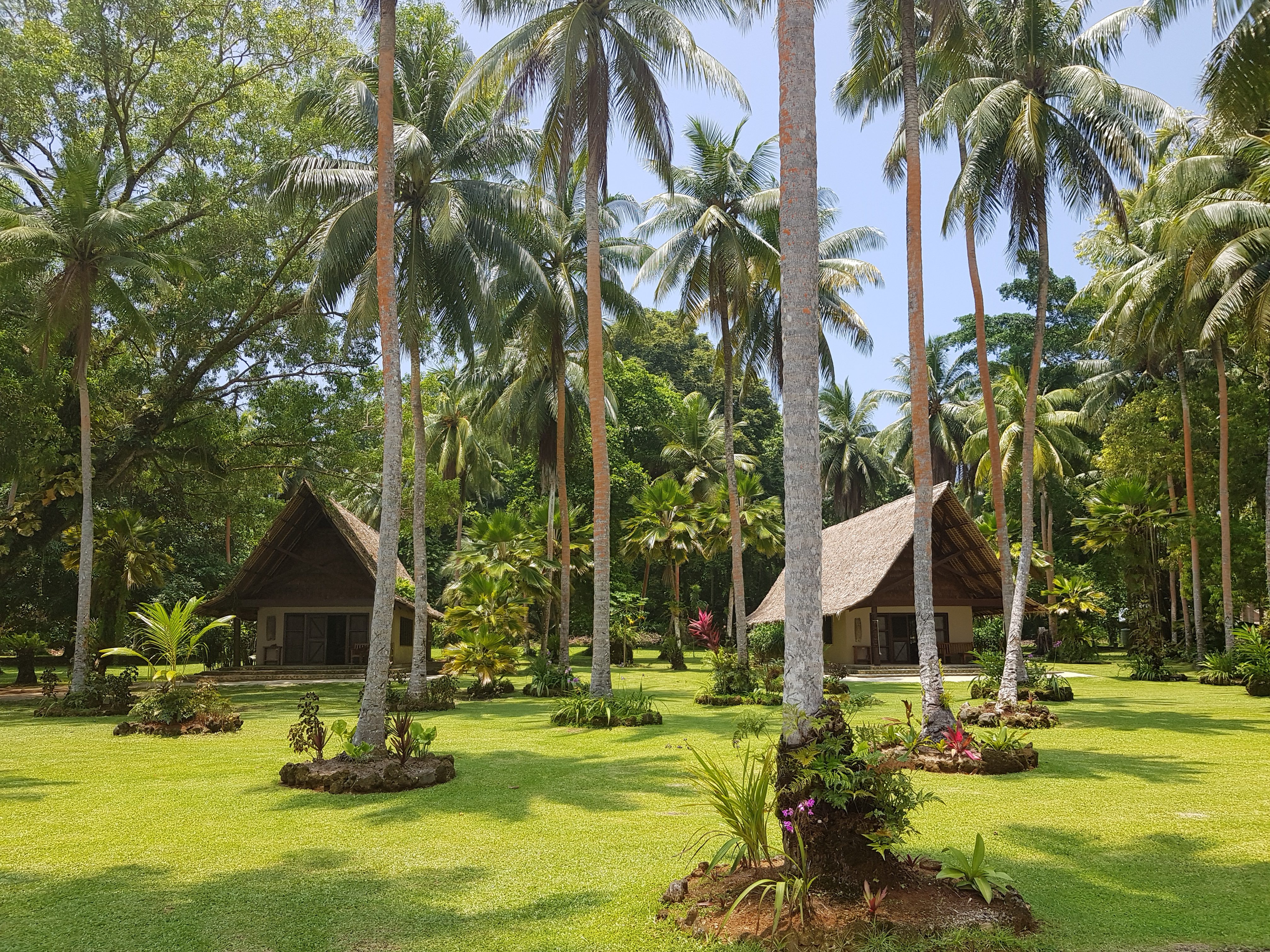 Days here were spent learning how to canoe in a handmade local canoe, which was damn difficult I tell you! Once you got the wobbles, it was either reef face planting time or you correct that stability quick smart. Happy to report I stayed dry the entire time. Until we went out to a deserted island and then there was no holding me back from another opportunity to snorkel in some of the bluest clear waters I have seen on my travels. I begged the boat driver to leave me there, but no.

Last stop on my visit was back in Honiara. The place is so underrated. Now I agree that most cities are overrated, I just am not a city girl, but this is a smaller Pacific Nation, so you can hardly call it a city. There is so much to do in Honiara, you definitely need to treat it more than just a transit point or stopover.

I had learnt of a wreck just offshore that you can snorkel. Many expats go out and snorkel it before their work day starts even, and I was told it would not disappoint. I made my way out there. Laying off Bonegi Beach is the wreck of a Japanese supply ship that well, just didn’t make it. You can walk straight off the beach to snorkel it, just pay the gatekeeper (aka an old man who was just hanging around) a few Sollie Dollies (Solomon Dollars) and all is good. 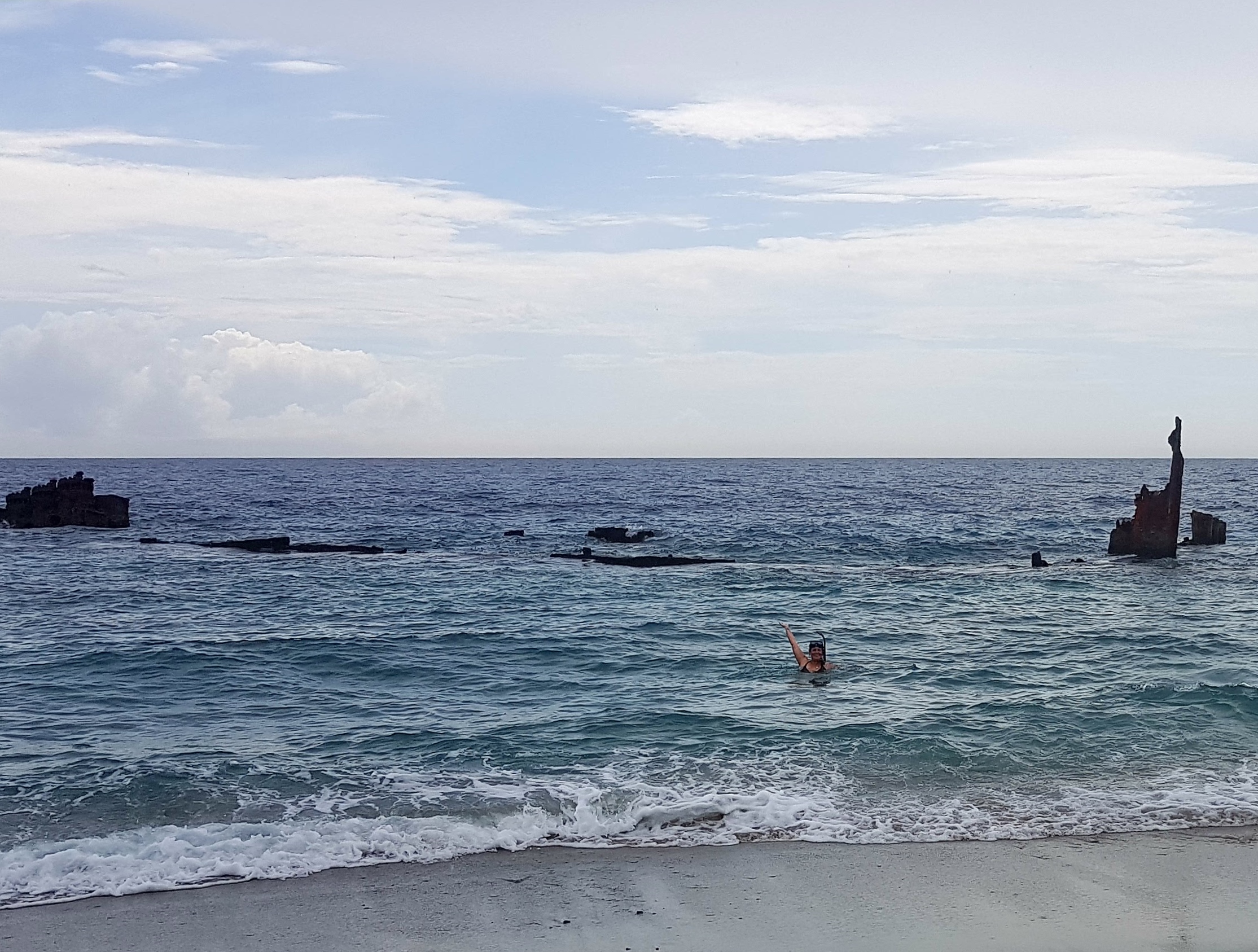 Before leaving the Solomon Islands, I made the – outrageous, stupid, best? – decision to try betel nut before getting the flight home. For those who don’t know, betel nut is something that a number of Pacific Island nations chew. Take one nut, rip the husk off with your teeth, then chew. It tastes so bitter. Then you get a bean looking thing, and dip it in a bag of white substance I am told is lime, then chew it all in one. Suddenly my mouth is red, like I just devoured some bloody corpse. It doesn’t look good but the buzz it gives you is worth it. The locals at the roadside stand where I bought it were highly entertained by my efforts. However, not as entertained by the poor soul who had to sit next to me on the plane for 3 hours back to Brisbane as I was buzzing not only from the betel nut but my truly amazing adventures and experiences is the Solomon Island. 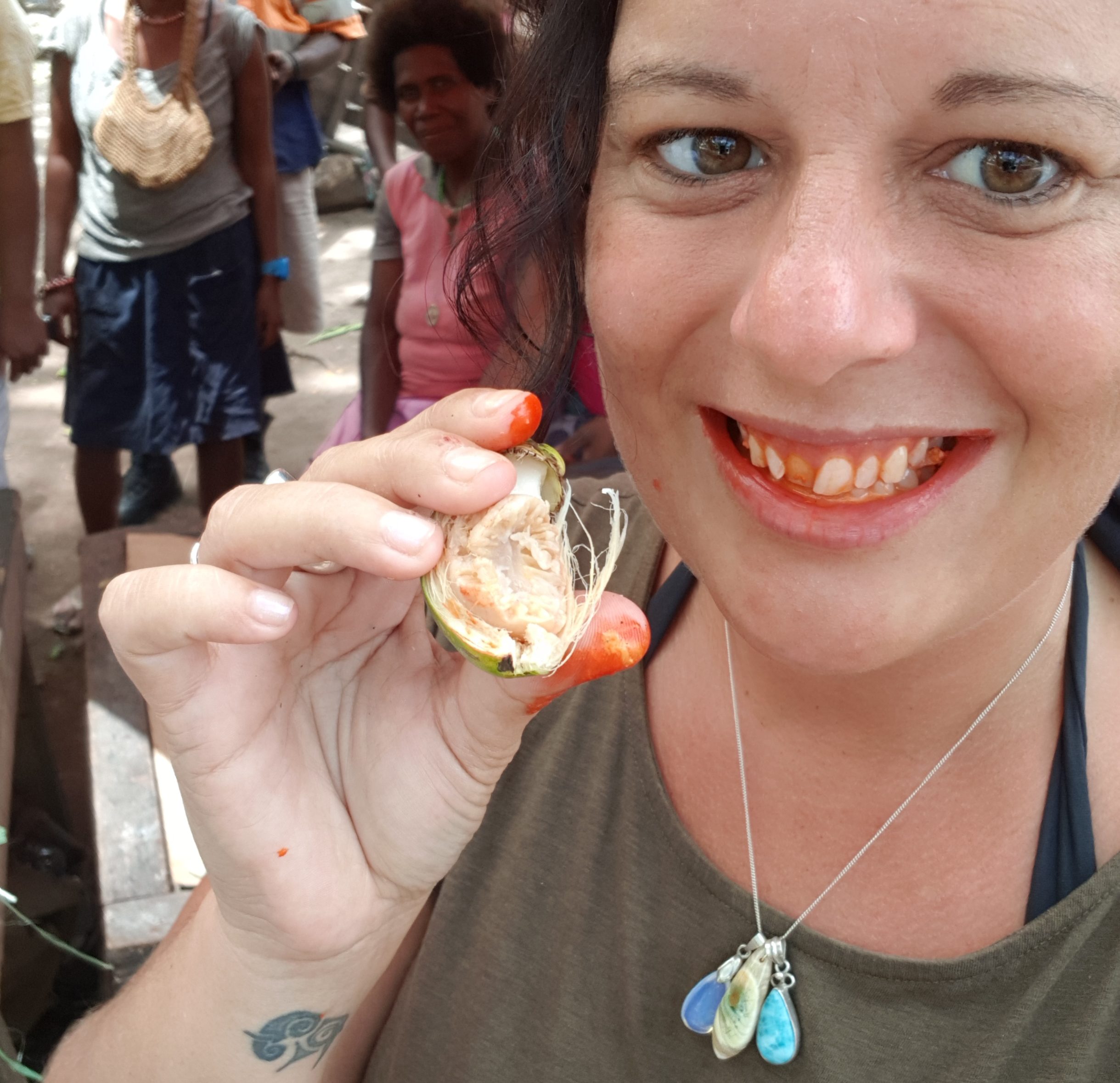 If you want to read more about my adventures in Solomon Islands, please see the below published articles. While I was hosted by Solomon Islands Tourism Board, they have not approved nor edited any of these articles and all words are my own.

Kate Webster is a world traveller, ocean lover and conservation warrior who is determined to make every moment count for not only herself, but the world around her. An editor and travel journalist, Kate travels the globe in search of vivid imagery and compelling stories that capture the essence of the people and places she visits. She is a passionate conservation advocate, sustainable traveller and always travels with reason and cause. Born out of a life-long love of travel, the ocean, wildlife and conservation and fascination with the world around her, is Kate’s inspiration behind her writing and photography.

QUEENSLAND 🍃 Being a Queenslander is not only a

POWERFUL 💙 💧 "A waterfall begins from only o

SHINE 💫 Let your light shine. Even in the darke

CONSERVATION 💚 Such an honour to have been call

TROPIC 🐠 Possibly one of the best resort pools